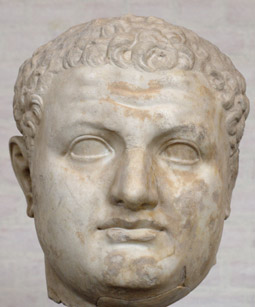 Titus Flavius ​​Vespasian reigned from A.D. 79 81 A.c, featuring his kingdom brevissino for public works which he built in Rome – on all the baths that bear his name and the completion of the Flavian Amphitheatre – for magnanimity towards the people who rescued in 79 A.C because of ‘eruption of Vesuvius and the following year, when Rome was burned.

Before reign of Titus distinguished himself as a valiant general in the suppression of the rebellion in Judea in 70 A.C led to the destruction of Jerusalem, in his honor was erected the famous Arch of Titus.

Historians contemporary agree to consider him one of the best emperors, Tito was loved by the people for his generosity, paternal affection and balance, and much that was deified soon after his death.