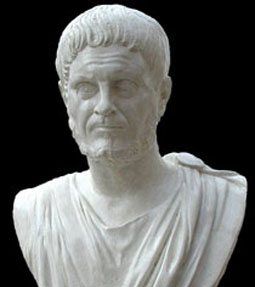 Gaius Aurelius Valerius Diocletian reigned from 284 A.D to 305 A,D. The year he abdicated, had the merit of strengthening the Roman Empire militarily defeating the Sarmatians and Carpi, the Alemanni in 288 A.D, ending the rebellion in Egypt in 297 A.D and 298A.D and to make taxation more equitable.

Diocletian was a reformer from different points of view: he reorganized the division of the provinces; ensured economic stability and military empire he inherited state of collapse; On 1st March 293A.D he appointed two Caesars, vice-emperors, Galerius and Constantinus, thus giving rise to a tetrarchy which, although effective,was abandoned immediately after the abdication of Diocletian because of the dynastic ambitions of Maxentius and Constantine, sons of Maximian respectively and Costanzo.

Among his flaws the failed attempt to introduce tiered pricing that is well taken proved counter-productive and therefore quickly forgotten.