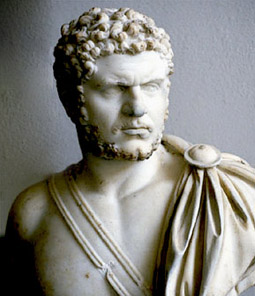 Lucius Septimius Bassianus, known by the name of Caracalla, reigned from 211 AD to 217 A.D.

Caracalla is known to have issued in 212 A.D. the “Constitutio Antonine” which provided for the extension of citizenship to all free inhabitants of the Empire except Dediticii, functional mainly to cope with the increasing military spending (raised his pay to the legionnaires) with the increase of the revenue raised from them.

He was also known for its exorbitant fees: duplicated inheritance taxes and those of bringing liberation from 10% to 20%.

Generous toward the people and the courtiers, who lavished considerable sums of money, he built numerous buildings in the city that was to visit, circuses and amphitheatres were systematically demolished after that without him they had been inhabited or even visited.

His reign was marked by several wars against the Germans by Rezia that threatened the western borders of the ’empire, the East, Antioch and Alexandria in Egypt.

In 212 A.D. began the work of the “Baths of Caracalla” were completed the same year of his death. The “Baths of Caracalla” should be counted certainly among the most beautiful monuments of Rome: born to accommodate over 1600 people with many marble basins; not surprisingly they were considered one of the seven wonders of the world.

Caracalla was considered by contemporary historians as ruthless and unpopular among the Romans.