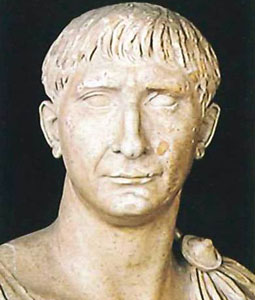 Trajan before becoming emperor he developed a cursus honorum of respect: he held the office of Quaestor, Praetor, Tied Up, and military tribune in 96 Console and became Governor of Germany.

He was able to give a boost to the economy, mainly due to lower lending rates to businesses, and renew public administration.

FURTHERMORE had the merit of renewing the noble class, with the appointment of provincial origins and equestrian; Senators forced the nobles to investments of at least 1/3 of its assets in Italian lands and established the so-called “alimentationes” for the study and then the use of the orphans in the lower cadres of the administration.