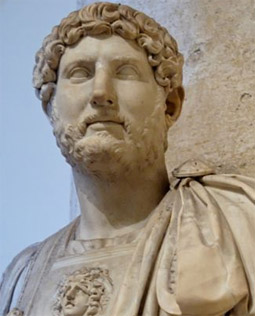 Publio Elio Trajan, Hadrian, Roman emperor of the dynasty of the adoptive emperors reigned for over twenty years, from 117 AD until his death in 138 A.D.

His cursus honorum was brilliant: three times held the office of military tribune; he became quaestor , tribune of the plebs and magistrate.

Adriano represented what today we would call a reformer: his reform which introduced a significant migloramento of the condition of the slaves.Tolerant towards Christians, proceeded against them solely on the basis of events and facts and concrete and not, unlike itspredecessors, relying on general accusations.

During long trips who performed throughout the Empire (in Gaul,Britons, Germany, Mauritania, etc.), secure that the absence did not affect the tightness of the system – a theme that haunted instead of the other emperors – Hadrian dealt with matters concerning the defense system but also of building and administrative aspects in order to improve the quality of life of the provinces with a significant rationalization of costs (today we would call “spending review”).

His style was rather spartan, rode horses and shared the harshness of life of the legionaries.

Despite his pragmatism, Adriano did not neglect the art: passionate about visual arts, literature and architecture in his reign Rome fùenriched with temples, like the Temple of Venus and Rome, and public buildings.