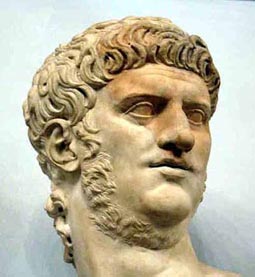 He married his cousin Claudia Octavia daughter of the deceased uncle Claudius; in love with Poppea repudiated Claudia Ottavia.Poppea was suspected of having organized the murder of Agrippina, Nero’s mother that he was opposed to that report, who died poisoned.Nerone married Poppea in 62 A.D.

On the night of July 18, 64 A.D Rome was devastated by a fire which Nero blamed so unreliable: Tacitus wrote, on the contrary, that Nero did his best to shelter the homeless in the mausoleum of Agrippa and in the imperial gardens and establishing a ceiling price for the price of wheat.

As well is the false accusation that Nero had killed Poppea instead died of an accident.

NNero had as bitter enemies those who were harmed by him and others because they regretted the Republic: in 65 A.D was hatched a conspiracy against him, headed first by Calpumio Piso, from then senator Plautius Lateran, to others later, and finally by the poet Lucan who fell in disgrace. Nero, worried about the conspiracy, doubled the guards, arrests and torture.

Nero committed suicide on June 9, 68 A.D , helped by the freedman Epaphroditus to stick the dagger in the throat that Nero did not dare to push hard.