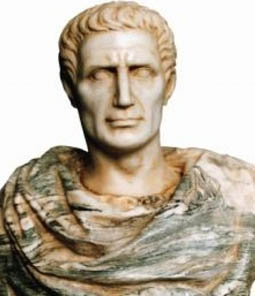 Gaius Julius Caesar was the first Roman Emperor, that title was never actually awarded, even though he had the powers in all respects. He was dictator from 49 B.C. 44 B.C.

Giulio Cesare was especially a large general strategic capabilities, particularly loved and respected by his men. One of his best qualities was to bring the enemy on the battlefield favorable to him.

In 55 BC, the first attempted invasion of Britain, but after three years he had to return to Gaul in 52 BC as Vercingetorix had managed to build a coalition of Gallic tribes to rebel against the Roman subjugation.

He fought against the Helvetii, Belgae, Veneti Nervii and being able to extend the domain of the Roman Republic from the Atlantic to the Rhine.

In 50 B.C. Pompey made ​​by the Senate assign the government of Gaul governor of Gaul already destined to Julius Caesar, ordered him to disband his army. A year later, Julius Caesar crossed the Rubicon sparking the civil war won: Julius Caesar became the undisputed leader of Rome, eager to take credit of the title of “Imperator” transmissible to the heirs octene and the tribunician power.

For Giulio Cesare at this point it was possible to create radical reforms: he reorganized the bureaucracy, limited two-year term of office as Governor of the Province and instituted an agrarian reform which included the distribution of land to urban proletarians with more than two children.