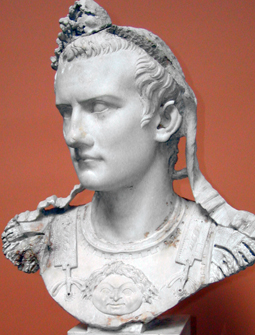 Caligola was the third Roman emperor.
He’s known for the famous provocation…..He titled his horse a senator in a sign of contempt for the Senate.
Gaius Julius Caesar Germanicus, nicknamed Caligula (“little murky,” shoe), was between the emperors more “populist”, we would say to nowadays, due to an extraordinary generosity towards the mob to which bestowed something like 3 billion in gold and which captivated the favor with glitzy circus games, embodying the well-known motto, dear to the Latin “bread and circuses”. Caligula was able to be loved for having abolished the privileges enjoyed by the senators.

His short reign, from 37 AD to 41 AD, was characterized by numerous public works: in particular Caligula built the aqueduct of the Via Ostiense.

Painted by some historians of his contemporaries as an insane – it is said that once, the missing prisoners, ushered into the arena to face the lions the first file of the circus .He was incestuous with his 3 sisters, obsessed with sex until satyriasis, fierce and bloodthirsty toward his enemies – political opponents, senators and nobles – irascible, unpredictable and self-centered, Caligula is one of the most controversial figures of the emperors: Following was reevaluated its intelligence and recognized a certain strategic capacity.